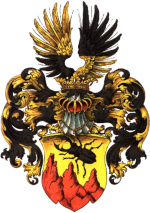 Many people spend a lot of time researching their ancestry and relatives world-wide. It’s probably a human need to want to know one’s origins.

At present we can trace the “K” families through several lines back to 1496. Our ancestor Hermann Keferstein was born around 1496 and passed away on November 3, 1573 in Colditz, Saxony, where he began the family tradition of paper-making. At the photo-carousel* of this Homepage, you will find two photos of paper mills operated by the Keferstein´s, portraits of a Keferstein lawyer, who was the mayor in the German city of Lüneburg, a Keferstein doctor and a Keferstein artist. In addition you can see some Oil paintings by this artist.

If you are interested in the “K” families, in the personalities of the past centuries, one of whom was in contact with Goethe, or the worldwide network of the family then you should join us.

*The photo-carousel can be seen on large screens only.

Our pedigree ranges from the year 1497 to today.

Learn about famous ancestors such as Mayor, scientists and the Appreciation of their life achievement in museums, writings or street names.

Every 2-3 years the association organizes a Family Meeting.